Rehabilitation of upper limbs can look very different for many people. However, constraint-induced movement therapy (or CIMT) is frequently used as a therapy to re-learn to use the affected limb.

“Learned non-use develops during the early stages following a stroke as the patient begins to compensate for difficulty using the impaired limb by increased reliance on the intact limb. This compensation has been shown to hinder recovery of function in the impaired limb.”

In general, CIMT therapy consists of restricting the use of the more functional arm for up to 90% of the day – this is considered an intensive therapy. Some patients do see great benefit in implementing a modified version of CIMT during physical or occupational rehabilitation exercises.

Be sure to speak with your doctor, physical therapist or occupational therapist to ensure you are doing what is best for your recovery and rehabilitation process. 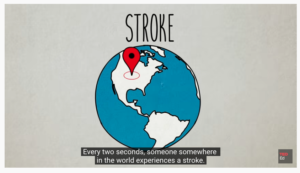 What happens during a stroke?

Explaining what happens during a stroke can be challenging. This informational video hosted in TED ED and accessible through YouTube, educates in a simple and

Stroke in women – risk and symptoms

Although more men have strokes per year than women, women’s strokes tend to be deadlier. This is due to a variety of factors, including significantly

Aphasia is the inability to speak, read, write and/or listen. Around 20-40% of stroke survivors will experience some degree of aphasia and thus can have

Taking care of yourself

Taking care of others

Taking care of yourself

Taking care of others